Normally getting hit in the face with coloured powder might not be welcomed, but if you’re a widow from
the towns of Vrindavan and Varanasi in India you’d be thrilled.

These towns are home to some 2,000 widows who’ve been shunned by their families because of orthodox traditions. But times are changing in India and since they started celebrating “Holi” (festival of colours) 3 years ago, women from around India have begun celebrating with them.

“The best part about the festival is that we get to change and wear different clothes than those that we wear almost everyday,” Manu Ghosh told AFP after taking part in a Vrindavan paint fight on Tuesday…We can dance, sing and mess around together. The food, particularly the sweets during Holi, also remind me of the days when my husband was still alive,” said the 85-year-old who was widowed 21 years ago.” 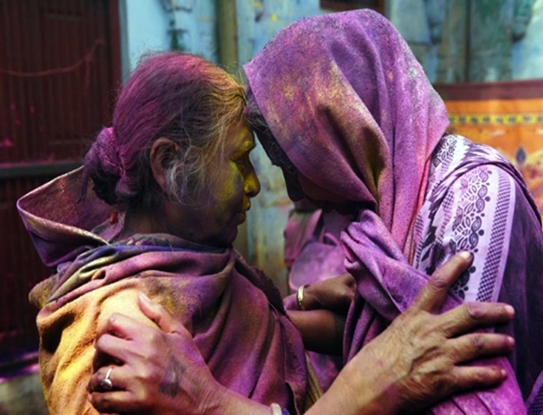 « Watch what happens when you donate your hair