In an article by quartz, the ongoing rise and acknowledgement in what China is calling Tongqi or “homowife” (the abbreviation of the wife of a homosexual in Chinese)  is a recent occurance.

It is believed there are millions of gay men married to women in China. The rough stats are 20 million gay men of which 80% will marry a woman.

The women in these marriages are becoming a force in the gay-rights movement. “If men are free to openly have relationships with other men, sham marriages like theirs will no longer happen.”

But the pressure to be married,  sham marriage or not, is far greater than living openly.

“The idea is still ingrained in modern China; men are under social pressure to marry and produce a male heir to carry on the family line. Though new generations are more open-minded, many still believe that to marry and have children are the two most important things in life, whether they are gay or straight.”

But where does that leave the women who unknowingly marry gay men?  Divorce is not easily gotten, and those that divorce, some are left struggling financially. Some women are choosing to stay married to preserve their families.

Some women are organizing to bring awareness “Jiang first learned there were other women in similar marriages from China’s first homowives meeting in 2009.”

One of these former ex-wives, “Little Delan,” also brought awareness when she paraded in a bridal gown during a Valentine’s day festival (Qixi Festival) where she had a sign which read: ““I am the ex-wife of a gay man. Seeking marriage at Qixi.”

“She told Chinese media that, besides finding the right man, she wanted to raise awareness about homowives, and the need for China to offer homosexuals equal rights and legalize gay marriage.” 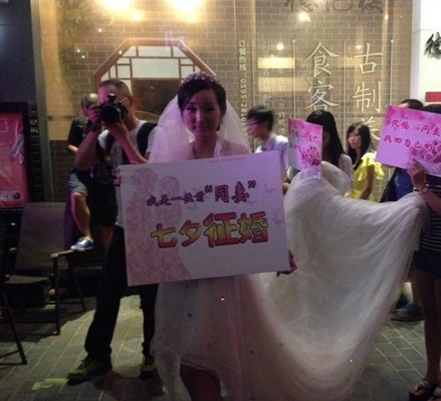 « 14 year-old girl from Chile wants to end her life

Watch what happens when you donate your hair »