When temperatures in NYC plummeted to record-breaking lows, Denise Lauffer, knew she had to go save Charlie.

“Charlie, a local feral dog, who was in desperate need of medical care. The black-and-tan canine had been born to a wild pack of around a dozen dogs in Highbridge Park, NY.  “The other dogs mysteriously vanished, leaving Charlie all alone, said Julio Belliar, 52, who’s lived in the neighborhood for 34 years.

“Worried that Charlie was too old to survive the relentless weather conditions after spending 10 years in the park, Lauffer wanted to get him safely indoors, but knew she would ultimately have to earn his trust to do so after he had eluded capture attempts in the past.”

So she constructed a doghouse and snuggled with him in order to ensure his survival.

In an article on Dnainfo.com Lauffer said, “Charlie had coats and blankets and was sleeping on pillows and hand warmers and hot water bottles,”  “You name it, he had it.”

This is a very lucky dog, he’s loved by Lauffer and many residents in his neighborhood. 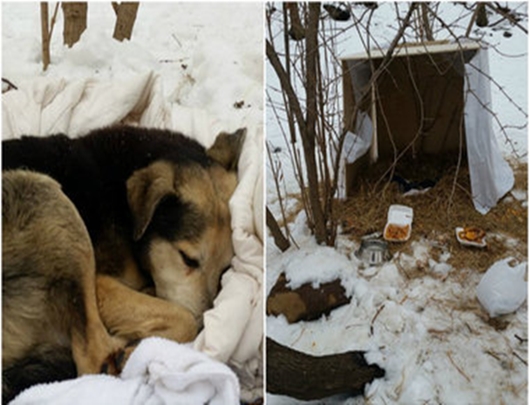 « Woman accidentally kills herself while adjusting her bra holster