About Rosie the Riveter

During WWII, The government launched a huge campaign with the Iconic image of Rose the Riveter in order to recruit women into the workplace.  But, It wasn’t just patriotism that influenced women during WWII to work, they also needed the money, with so many men being away.

They soon discovered other benefits of working, they liked learning news skills and proving themselves to be equals in jobs which were thought of as “Man’s work.”

And just like men, women would quit their jobs If they were not happy with location, pay , or environment.
But Unlike men, women had to deal with double duty: working and caring for homes and families. 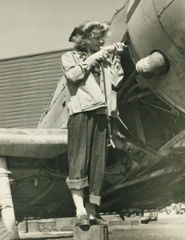 Eventually women were praised by their employers as they gained more acceptance in the work place.  But, this “acceptance” was only temporary.

In 1945, More than six million American women who entered the workforce during World War II are pushed out of their traditionally male jobs as soon as the war was over So most returned to their traditional roles of homemakers, but not all women returned, some continued working.

All of these women, helped pave the way for working women today.

More from HistoryMore posts in History »