When it comes to it, even the littlest “EVE” can make a significant impact. Helping in the fight again school segregation.

Linda Brown is being shown a newspaper documenting the historical unanimous 1954 court case win that she and other children were part of during the 1950’s.

Linda Brown and her sister, Terry Brown, whose parents started this civil rights lawsuit, ‘Brown versus Board of Education,’ that let to the integration of the United States education system.

How brave those little children were… 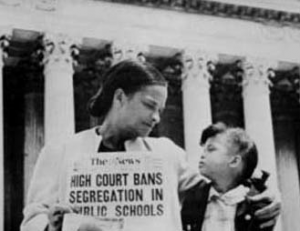 More from HistoryMore posts in History »