This Katy is an Arsenal fan!  Meet Francesca Brown, a 31 year actress in London, whose career has nearly been ruined because she’s looks like Katy Perry.

In her interview with Elle.com Francesca describes the first time she was mistaken for Katy Perry.

“the first time she was mistaken for Katy Perry. It was 2008, and Brown had no clue who the singer was. “She had just released ‘I Kissed A Girl,’ and she wasn’t famous in England at this point,” Brown explains. “I was in America, and I was standing, waiting to go into a club in Vegas and, this guy came over who was security. He was like, ‘Don’t wait. Follow us.’ And I thought, ‘They think I’m someone, but I don’t know who they think I am.’”

Unfortunately for Brown, as Katy Perry’s fame has grown so has the constant mistaken identity occurrences. Not only is she stopped on a regular basis in public, but trying to have a career as an actress has become really difficult.

“when she was with Russell Brand. I would just get mistaken everywhere. I’d have people running after me; I went shopping, and I had children running after me. I went to a music festival here in London, and there were cameras and crowds of people turned up wanting their picture [with me]. Everyone would think I was her!

[In my career,] I was working quite a lot as an actress. I was going up for auditions, and I kept getting the comparison to Katy Perry. For some reason—I don’t know why—it was costing me jobs.”

After her failed attempts to look less like Katy Perry by dying her hair color from brunette to blonde and having more difficulty getting acting jobs, Brown decided to embrace the situation.

“I obviously needed to do something to pay the bills, [and] I was contacted by an agency in the U.K. that deals with lookalike people. I said no for ages. I had put so much into my acting career, and I didn’t want to get confused. In the end, [I thought] I could do this impersonation work [rather than get an office job], and that makes me free to be able to carry on auditioning. It was so much fun because I was on stage and I’m getting to perform incredible songs in fun costumes.

Although [looking like Katy] made the acting harder for me, it hasn’t stopped me. I do believe in myself as an actress and I know I have what it takes.”

“I [do] a little bit of sports presenting for like a sport’s show in England. Arsenal is my team, so I’m constantly either really happy or really sad because they’re always winning and losing.” 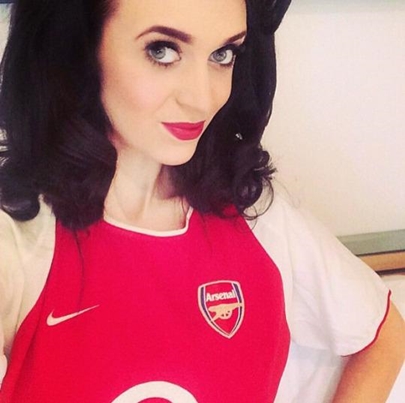